The NAFI Foundation was founded in 1981 for educational and scientific advancement purposes, including distributions to qualifying organizations supporting these efforts in the aviation community.  We continue to strive for educating the future of aviation and nurturing to create the next Neil Armstrong or Chuck Yeager.

Contact us. A helping hand is always greatly appreciated! 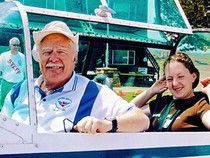 ﻿﻿Ken’s first job as a CFI was in 1962 for Kensair Corporation at Jeffco Airport near Denver. In 1963, he became an instructor and then Flight Training Clinic Director for the AOPA and wrote the original AOPA Mountain Flying Course. He was a part of the group who conceived the idea of forming a professional organization representing flight instructors that became the birth of NAFI. Ken has over 19,000 hours flight time and his ATPshows eight type ratings (Fairchild FA-27, Learjet, Gulfstream G159, Cessna Citation CE 500, Westwind IA-JET, Hawker HS-125, Gulfstream G-1159, and Beechcraft 1900). His Commercial Privileges include ASEL,ASES, Rotorcraft-Helicopter, L-B34 type rating

(Howard Super Ventura), and Glider. In his 49th year as a CFI with over 6,000 instruction hours given, his certificate shows Gold Seal, ASME, Instrument-Airplane, Rotorcraft-Helicopter, and Glider. Ken served as a Designated Pilot Examiner for over 25 years, which included approvals for Private, Commercial, ATP, CFI, ASEL, AMEL (with as many as 5 LOAs for different models), Helicopter, and Learjet.  He has owned or operated flight schools under FAR Part 61, 141, and 142 and served as Evaluator in the Beechcraft 1900 for the 142 training center he founded.

“NAFI has a proud past and we have a very talented and dedicated board of directors and staff who are working hard to take our organization to the next level. I am proud to be a part of that effort.”

An easy way to donate. Choose the NAFI Education Foundation as your Amazon charity of choice!

The NAFI Professional Development Program needs presenters to produce courses in this members' only program.